I am taking a drawing class in which we sometimes work from photos, which by their nature, capture 2-dimensional records of 3-dimensional things, fixing a composition, and in so doing, eliminate several fundamental challenges of drawing.  I have long believed that it is preferable to draw directly from life, and to wrestle with the illusive third dimension, than to draw from photos.

But I am learning that there are opportunities in letting a camera do some of the work.  Compositions can be tested, cropped and re-cropped with ease, enabling quick explorations and unexpected discoveries.  A universe of subject matter can be accessed from the comfort of the studio.

Here is a painting by Charles Sheeler that I love for its stillness, sense of space, composition, color and subject matter. 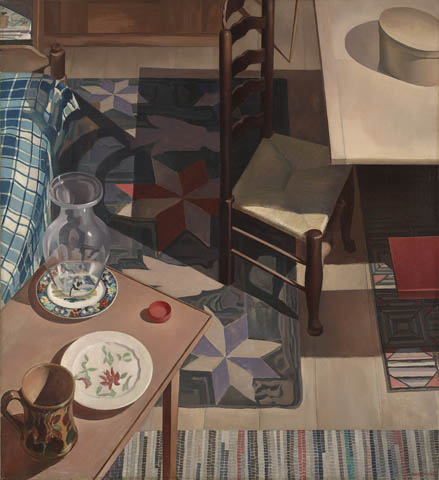 From the website of the Yale Art Gallery where this painting resides, “American Interior is the last and most complex of Sheeler’s paintings of interiors. A master photographer, Sheeler used his own photographs as the basis for many of his paintings. He modeled this composition on one of a group of photographs he had made in 1929 documenting the living room of his former home in South Salem, New York. He photographed the space from above to create a steeply rising floor. In the painting, the cropped composition, oblique view, tilted perspective, and distilled contrasts of light and dark that flatten the forms and emphasize their geometry reveal the artist’s eye as a photographer. His modernist vision responded to the purity of forms and patterns found in American crafts, shown here in the Shaker box, textiles, and chair. In American Interior, Sheeler celebrates both the clarity and precision of the camera and his love for simple, handmade American objects.”

The camera can be an artist’s best friend.

In researching this blog post, I found that Yale Art Gallery’s website, in addition to access to its collection, includes an intriguing online magazine called “What is Art and Why Does it Matter?  I am reminded that computer is a great tool for virtually visiting museums and galleries around the world.